Here are the places creeping it real across Canada

The Great White North is a beautiful country, but it can also give you the creeps if you let it. From coast to coast, every province, city, and ghost town has a spooky story to tell, it’s just up to you to listen. From castles where a tragic accident occurred to the 100-year-old homes with a mysterious past, here are the 15 most haunted places in all of Canada.

Since it opened to the public in 1888, the Banff Springs Hotel has seen history, celebrity, and rebuilds. In that time, however,  it’s also seen a whole lot of tragedy. You see, while millions of guests have checked in, there were a few who have never checked out. Some even believe that they still roam the halls of the iconic concrete castle in the Rockies today.

Built in 1915, one of Nova Scotia’s most popular tourist destinations, Peggy’s Point is said to be haunted by the ghost of a woman named Margaret, whose children and husband were taken in in two separate accidents which occurred at the same location – the lighthouse. Inconsolable, she took her own life and is said to be seen on the rocks from time to time. Though this particular ghost isn’t threatening in any way, she is said to scare the absolute crud out of those who get too close to her, by jumping into the rocky waters below.

Despite early warnings by the Indigenous people who lived on the land far before it was colonized, the town now knowns as Frank Slide was built under what many had literally called “the mountain that moves.” Unfortunately,  because they refused to listen in 1903, the cold temperature and wet conditions, coupled with the fact that they had built a mine into its side created the perfect storm; and as you may have already guessed, it wasn’t long until the unstable structure collapsed over the town killing 90 residents.

Established as a North-West Mounted Police training facility and home base, Fort Battleford in Canada’s North West Territories, is also the site of a ton of paranormal activity.

Here, it was actually a tragic massacre and a hanging which led people to believe that the place is occupied by several ghosts including a boy named Charlie – who is said to sell like chocolate chip cookies.

For those who live in the area, it should come as no surprise that Vancouver’s Waterfront Station made the list. From ghostly appearances of a flapper-dress-clad woman to haunting encounters and unexplained activity, Vancouver’s iconic 109-year-old building is one that gives us serious chills.

As Canada’s oldest maximum-security prison one can only assume that the walls of the Kingston Penitentiary have seen the worst and most violent. Though it’s now empty and abandoned, the space is still said to see a whole lot of action. Curious? Those in the area can actually take a guided tour where, if you’re lucky, you may even see a ghost!

Located in Victoria, this magical castle is not only beautiful – it’s also kind of terrifying. So much s that it’s been used in movies, photoshoots and unsettling TV shows in hopes of really selling an eerie vibe. Said to be inhabited by the original owner and his daughter, this 1800s build is incredibly haunting and totally worth viewing if you’re interested.

Aptly named for its creepiness, The Isle Of Demons alternatively known as Quirpon Island is actually beautiful – though sailors believed it to be cursed. As legend has it, the Island is haunted by a French noblewoman who was sent to die there after she had an affair with a younger man. Scandalous.

Allegedly haunted by the many, many inmates who were hanged, murdered, jailed for life and abused, Don Jail closed back in 2013 and for good reason. Though it no longer operates as a prison it remains today, abandoned – creepy, and open for guided tours almost every day.

Located on the west coast, Tranquille Sanatorium is about as spooky as it gets. In 1907, this building was opened as a tuberculosis hospital, however, it shifted its focus to the mentally ill. This was not the only time it changed its purpose though, in 1983 it briefly operated as an institution for young offenders, and now – it’s actually surrounded by a farm – whose owners recently gave tours of both the hospital and the tunnels that run underneath it.

A post shared by Dustin, the strange Ezinicki (@the_muddy_waters)

At over 100 years old, the Fort Garry Hotel in Winnipeg is notoriously spooky. Over the years, guests have reported seeing apparitions, blood dripping down the walls and even claim to have felt someone climb into bed with them. The most active room? 202 – where someone had supposedly committed suicide.

Known as Alberta’s “Hospital of Horrors” Charles Camsell was originally founded in 1914 as an all-boys academy. In the years that followed, it was converted into a WWII base for American Army Engineers and most notably, a tuberculosis hospital where several indigenous people were sorely mistreated. After the slow of the deadly disease, the province recommissioned it as a general hospital of which it remained until 1993 when it was emptied out and abandoned.

Originally built in 1871 – the Grey Nuns Motherhouse is like something right out of a horror movie. Though it certainly wasn’t used for anything sinister, its basement does act as a crypt containing the remains of the over 250 nuns who died of an infectious disease – which to us, is a whole lot spookier than an apparition.

Edmonton’s Princess Theatre – the oldest standing movie theatre- was originally designed and built for the vaudeville acts of 1915. It was successful for a year but then fell into an economic slump. In order to bring in revenue, the owners recommissioned the top few floors as an apartment building, many of which are now considered to be riddled with bad spirits and stories of betrayal and grief.

Well, there you have it, folks. The 15 most haunted places in all of Canada. Now get out there and explore… if you dare. You never know what you’ll see, hear or even feel! 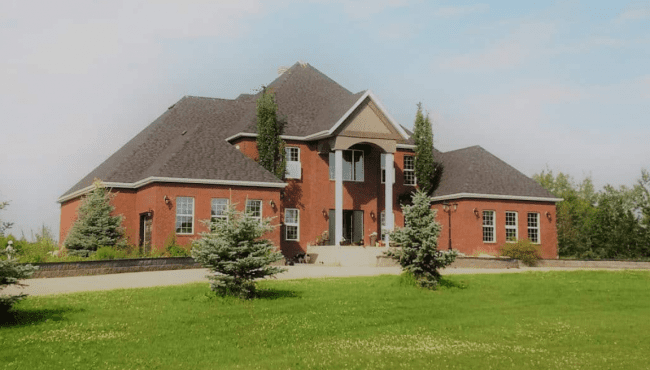 This luxury Alberta Airbnb has a butler, hot tub & private rink fit for a pro athlete