Catch you at the Billy Talent concert!

Yay, the work week is finally here! Said no one ever. Unless you’re lucky enough to live in Toronto, where there’s something fun going on every single day of the week. There’s so much going on around the city over the next few days, from concerts to immersive exhibits to city-wide restaurant events and more. You don’t have to wait until Friday to enjoy your life, especially not with so many great things to do in Toronto this week.

Here are 10 of the best activities and events to keep you entertained in the city this week.

Toronto’s popular RendezViews patio is now open for the season and there’s a party happening there on Monday that you won’t want to miss. Festivities include food and drink, lawn games, live music, giveaways, and watch parties for sporting events.

Concerts are officially back in Toronto and with capacity limits now lifted at venues in the city, it’s safe to say that we’ve been waiting for this moment for quite some time. If you’ve been missing the electric energy of cheering crowds and live music, this is your chance to dive back in.

Ready to rage like it’s the 2010s again? Billy Talent is taking the stage with Rise Against at Scotiabank Arena this week. If these two bands were all over your iPod playlist back in the day, it’s time to revive your teenage punk phase for a night.

Looking for a much-deserved trip? North American hotel chain, Coast Hotels, is celebrating their 50th Anniversary with a massive sale that you’re going to want to take advantage of!  You can enjoy a BOGO 50% off for every other night of your stay, when you purchase during their 96-hour sale window from April 5th ’til April 8th!

Live sports are back at Scotiabank Arena! Cheer for the Toronto Raptors in the stands and experience the energy of a packed house once again. With the players on their A-game, the Raptors mascot busting moves, and Drake in his courtside seat, it’s like the last two years never happened.

A brand new nationwide event is happening in Canada this April and it’s a celebration of Filipino cuisine. Diners will get to try everything related to Filipino cuisine by ordering from prix fixe menus, including traditional dishes like Adobo, and dining experiences like the Kamayan finger food feast. There are so many restaurants participating around Toronto and if you love to explore the city through its cuisine, this event is not one to miss.

The bestselling novel turned Academy Award-winning film has been adapted into a theatre production on the Mirvish stage. Room premiered on April 5 and showcases the harrowing story of a kidnapped woman and her son, who escape from the garden of their captor and venture out into the world beyond the room.

Where: 1 Yonge St
When: Various dates 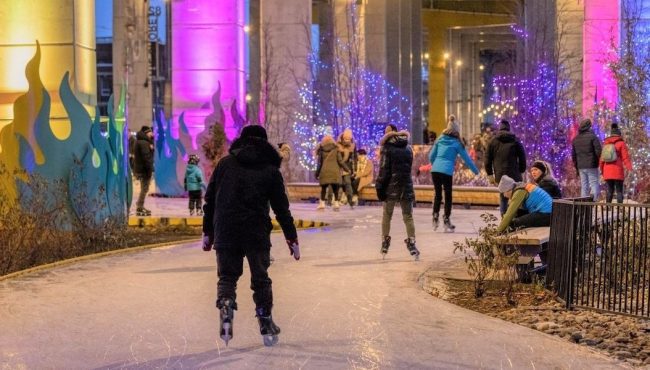